The Prohibition Era, AKA the Volstead Act, from 1920 – 1933 was truly a product of its time and environment. During the early 1900’s a group of Protestants lobbied to try rid society of its ills, specifically alcohol. This became known as the “Temperance” movement. Then in 1917, America’s involvement in WWI helped turn the nation towards Prohibition. Advocates argued the barley used in beer could be used to make bread to feed US soldiers. So on January 29th, 1919, the 18th Amendment was ratified and took effect a year later.

As we know now, The Prohibition movement did not serve its intended purpose. Bootlegging became the norm, drug stores sold alcohol as “medicine,” and speakeasy clubs rose to prominence with some estimating 30,000 in New York City alone by 1925. 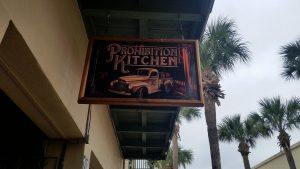 Prohibition Kitchen looks to tap into this nostalgic, romanticized, version of the era from which it gets its name. The brightly lit host station with its large backlit “PK” beckons patrons to come in. The restaurant is much bigger than it looks from the outside. The restaurant is beautifully decorated with copper-style ceilings and probably the longest bar area I’ve ever seen in a restaurant. It has a large selection of beer, wine, and other various libations. A couple of prominent TVs play silent films, a nice touch to cement the Prohibition Era theme. There’s also a good sized stage for live music performances. The restaurant has a 2nd floor loft area to accommodate more seating and get an overhead view of the restaurant and performing bands. 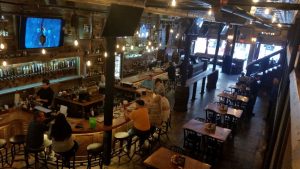 We were in St Augustine for the day and decided to stop by Prohibition Kitchen for a late lunch before heading to the St Augustine Amphitheater for a concert. Prohibition Kitchen serves an abbreviated lunch menu consisting mainly of appetizers, soups, salads, sandwiches, and burgers. The commitment to the prohibition era theme goes all the way to the design of the menu. While the back of the menu has your usual listing of dishes, the front of the menu looks like a newspaper, complete with a headline proclaiming the end of Prohibition and a front page, top fold picture of bar patrons hoisting their now legal beer in celebration. It also includes news stories of St Augustine’s role during this time period. That’s some Daniel Day-Lewis level of method menu acting.

We decided to start the meal with a cup of beer cheese soup and Poutine. The beer cheese soup was fine. Not the best I’ve had, but serviceable. It also tasted a bit bitter for me; however, I’m not a big beer drinker to begin with so it could be my palate being sensitive to the beer in the soup. The cheese wasn’t as pronounced as the bitterness somewhat overwhelmed my taste buds. The pretzel croutons were nice and added a good texture to the soup. 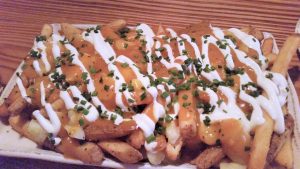 The Poutine was a good portion size. It was enough for me and my dining partner, plus some. PK’s version of Poutine is fries covered in short rib gravy, cheese curds, chives, and sour cream. As a platter of fries with cheese and gravy, it was fine. As an actual Poutine, it failed. The gravy tasted somewhat sharp. It honestly took me by surprise by how sharp it was. The cheese curds were half melted by the time they came to the table. I expect Poutine to have a deep, rich, umami, beefy flavored gravy with cheese curds that are mild in taste, slightly rubbery and, this will sound a bit odd, squeaky when you bite into them. PK’s poutine had none of these qualities. The addition of sour cream and chives did nothing to make it better. I understand restaurants doing “their take” on classics, but make sure the basics of the classic are done correctly before doing a riff on it.

For our mains, my dining partner decided to keep it light and go with a house salad with grilled chicken breast. I went straight for their PK Signature Burger. The house salad consisted of a spring mix of greens, marinated beets, radishes, and a sweet onion poppy seed dressing. Like everything else we ate so far, it was fine. It was a salad. The dressing was nice. It was sweet, but not overly so. The grilled chicken breast was dry, as chicken breast tends to be. There was a good amount of dressing to help it out. 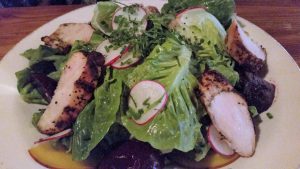 The highlight of the meal was the PK Signature Burger. PK’s burger is a house grind of short rib, brisket, sirloin, and log smoked bacon. The bun was spread with a red onion jam, and the burger was topped with an over easy fried egg and Red Dragon brand cheese. The bun was also branded with a “PK” for a neat visual aesthetic. I ordered my burger cooked medium and it came as requested. The burger, as a whole, is what I look for in a perfectly composed burger; juicy, a bit messy, and burger juices running down my elbow. The red onion jam added a bit of sweetness and the fried over easy egg added even more unctuousness. The burger tasted meaty and delicious. The side of fries was cooked nicely, with a good even crisp outside and fluffy inside. 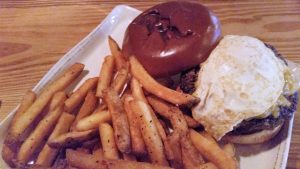 Overall, the burger saved the meal. It’s really too bad the rest of the dishes couldn’t match up. Like the Prohibition era, Prohibition Kitchen is a product of its environment. Its location is perfect for tourists, already high on history, to step in, maintain the allure of what makes St Augustine such an attraction and get some food in their system to walk a few more miles of the city’s beautiful downtown. And they have a neat “let-me-tell-you-about-this-place” story to tell their friends back home. The attraction is cool and I’m sure the live music atmosphere is top notch, but on our visit, the food failed to impress. 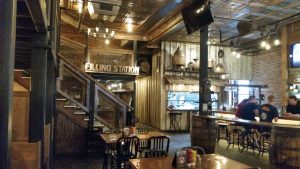 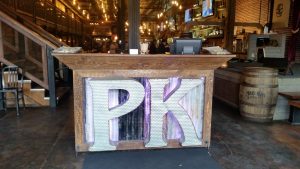